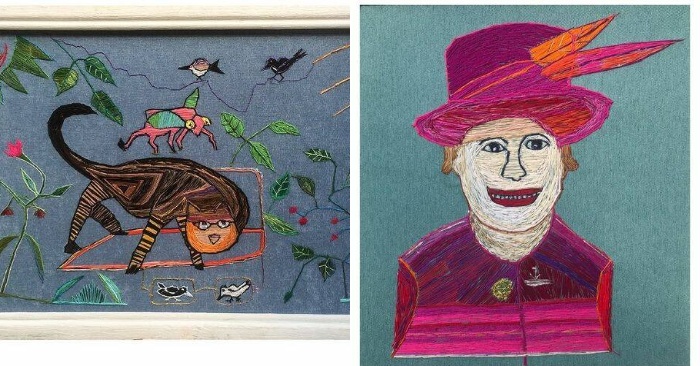 If you have talent develop it at any age

Yulia was born in 1938, graduated from forestry college, for a short time worked at a lumberjack, and for a long time she worked in the party organisation. She married triple, and has 3 children. She didn’t have art skills: at the age of 5 she was studied embroidery, but she never used this skill during her conscious life.

After retirement, Aleshicheva was fond of growing fruits and vegetables, looked after a dog and a cat named Pierre Bezukhov. But one day the quiet life of a pensioner was broken by a fire. An old country house burned down completely along with a dog and a cat. Yulia saw this, but could do nothing. After the incident, the woman was diagnosed with dementia: she began to forget the events. She often doesn’t recognise her relatives.

Her daughter, who lives in Leningrad region, took her mother to her house. Once Aleshicheva asked for a hoop, a needle and fabric. This is how the first works began to appear. Moreover, Yulia is inspired by a variety of objects: reproductions of artists, postcards, sculptures, book and magazine illustrations, and even posters.

Embroidered paintings are different from the originals, but this is their main feature. Yulia complements and transforms the images, puts her soul into them and demonstrates her own vision. All Aleshicheva’s works are unique, bright and creative. Work helps an older woman struggle against dementia and feel better.

The world learned about the work of Yulia thanks to her grandson Yan Gorkunov. He created an Instagram account for his grandmother and called it “girl from 1938”. The embroiderer’s page is very popular, her works are actively commented on and admired. The grandson reads all comments for Aleshicheva and gives her letters from fans.

Yulia’s work has been presented at several exhibitions, her grandson opened a shop for embroidered sweatshirts and T-shirts. By the way, Yan owns a company and plays in performances. Aleshicheva’s daughter makes products from papier mache and plastic, restores furniture and makes stoles. So the whole family is creative, but so far only the talented and creative Yulia has been able to win real popularity.