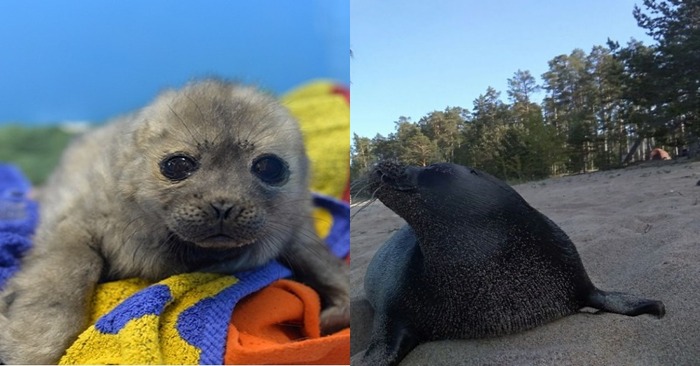 He climbed into the arms, longed for constant communication with people.

In the spring of 2016, a Ladoga seal cub crawled up to a man who was fishing on Lake Ladoga near the village of Sviritsa. Due to the fact that he was on the ice for quite a long time, a slight frost formed on his body. A kind fisherman quit his job and carried the baby ashore, where he was taken to the Marine Mammal Rehabilitation Center. It turned out that the cutie, which was named Teensy, weighs only 4 kilograms and is the smallest bear cub that the center has ever taken care of.

Two years ago, Teensy’s cub weighed only 4 kilograms and was the smallest seal in the rehabilitation center.

He climbed into his arms, tried to hug him and longed for constant communication with people. In general, he behaved very atypically.

Together with him, another seal came to the Center, which turned out to be wilder and eventually began to live in the wild.

Despite her boundless love for people, Teensy still needed to return to freedom.

However, when he was sent to free-swim, he just splashed in the water for 15 minutes and returned back.

Then they decided to let Teensy go free in a year, and before that they let him grow up a little.

The workers decided that it was necessary to make the cutie afraid of the representatives of humanity so that he would return to his natural habitat. So, the workers spoke to him rudely and did not scratch his stomach.

The reaction was sharp and the seal began to communicate with people only for the sake of fish and mooed angrily if he was not given anything.

A year later, the cat was released again, but after 3 weeks, cutie Teensy returned to the people and began to torment them.

Teensy rode boats, stole fish and even bit a person. As a result, he had to be sent back to the Center.

Now the cutie lives permanently in the Center. He’s got a fish, a pool, toys, and endless belly rubs.

Teensy has been trained not to become completely lazy, and now he can flap his flippers and fetch the ball.

The little cub behaves almost like a cat and, after eating, climbs into the hands of the workers and asks them to wrinkle and scratch his stomach.

The founder of the Friends of the Baltic Seal Foundation says that it is normal for a seal to be friendly with its relatives, but not with a person. “But if we wanted to breed a domestic seal, then the ancestor of this breed would be Tinzy,” says the founder.