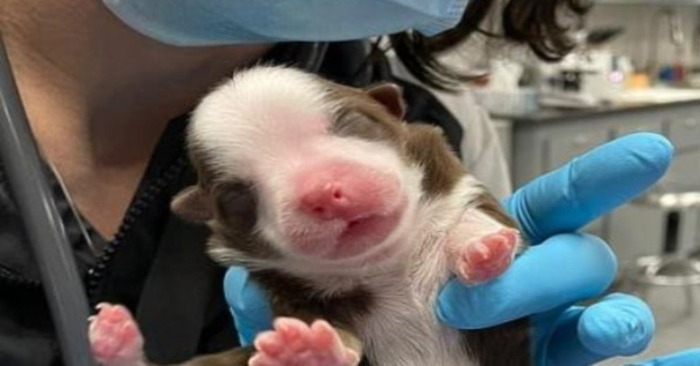 An unusual puppy was born which managed to surprise even veterinarians.

There are a lot of connoisseurs of non-standard beauty at the present time. Any features that might once have been embarrassing are now being turned into great value. And it’s good that the same trend has continued in the relationship of some owners with their pets!

An unusual puppy was born in the US state of Oklahoma, which managed to surprise even veterinarians, because the baby has not 4, but 6 legs and 2 tails at once!

This wonderful puppy is a sweet girl, who was given the nickname Skipper.

Skipper is an Australian Border Collie mix. The girl was born in an Oklahoma City veterinary clinic, where doctors rushed to find out more about the health of the cutie.

After examining the Skipper puppy, veterinarians discovered that the puppy had two pelvic regions, a pair of urinary tracts, and two reproductive systems. Doctors suggested that Skipper was supposed to be born not alone, but with a younger sister, however, for unknown reasons, the two fetuses did not separate in the womb.

It is likely that Skipper will need physical therapy in the future, but the child is doing great now. She eats well and develops quickly!

After making sure that nothing threatens the baby’s health, the veterinarians let Skipper go home, where her loving owners took care of her. According to them, the girl is growing up as a very active being. All 6 legs of the girl work properly, which means that it is not so easy to keep up with her!

The enterprising owners have already set up a fundraiser for Skipper to help cover the costs of the veterinary clinic and any treatment she may need. And, of course, many people fell in love with this unique baby so much that they are ready to help her in every possible way!