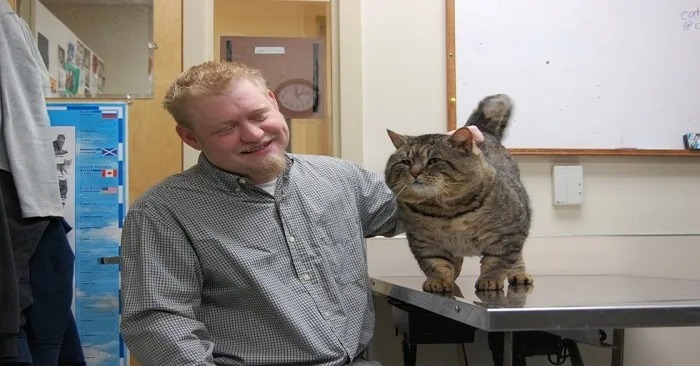 This cat broke into a woman’s garage and stole dog food from there.

Survival in the wild is especially difficult for pets. However, one once domestic, and now street giant cat not only survived, but also managed to maintain its weight at 9 kilograms.

In 2007, he became an internet sensation.

It turned out that he broke into the women’s garage and stole dog food from there. And, apparently, he did this all six months of homelessness. Finally he was caught. He was found stuck in a dog pit while he was carrying food. The owner of the house called a humane organization to pull him out of the hole and take him to the shelter.

On the left is a 9-kilogram Goliath, and on the right is a much larger than average baby.

Barbara, director of the humane organization that rescued the cat, noted that it’s not every day that one comes across such heavy cats. It is not known why, but this story became a sensation. The owner of Goliath saw this story on the news that evening and immediately recognized his cat. The next day, he showed up at the shelter with a photo proving the cat was his.

When the owner arrived, the employees of the organization found out that the real name of the cat was Hercules. Six months ago, the owner of the cat went to Canada for a serious operation. During this time, Hercules escaped from the nurse who cared for him at home.

In the end, the two were reunited and Goliath didn’t have to steal food.