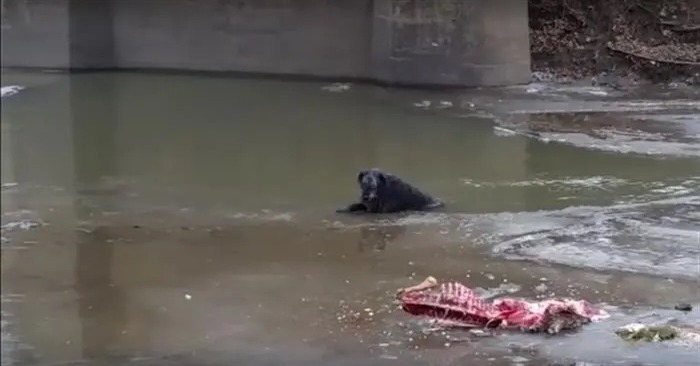 When the dog got into trouble, he didn’t expect a good outcome.

When a 13-year-old dog named Sam got into trouble, he didn’t expect a good outcome. The dog, a Labrador mix, fell through the ice.

He could not get out of the ice trap on his own, and the matter would have ended very badly. But then fate gave him another chance. Nearby, a man was walking his dog when he suddenly heard a shrill bark from the river. The man realized that the dog was in trouble, and immediately set to work.

He put his dog in his truck and headed towards the bridge where the barking was coming from.

Jerry saw Sam from the bridge.

Of the icy water, only the exhausted and frozen head of the dog remained. The dog fought desperately for his life.

Jerry tried to get close to the dog to pull him out of the water, but couldn’t.

Jerry tried to reach Sam, but he still couldn’t get close enough to avoid diving into the water. Finally he called 911. Even though Sam was so cold he couldn’t stop shivering, the vet got the poor animal back on its feet in 30 minutes.