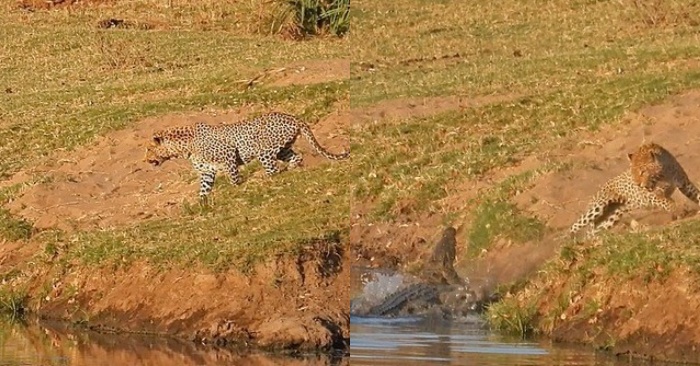 The predatory cat, without hesitation, decides to take away prey from crocodile.

A hungry leopard roams the African savannah of the Kruger National Park in search of food, but unexpectedly encounters a crocodile guarding his food.

The predatory leopard decides to capture the prey. This moment was captured by Alberto Scattolin, owner of Matimba Lodge.

“The leopard tried several times to catch prey from the crocodile, but each time the crocodile flew out of the reservoir, trying to catch the impudent predator”. “Every time, the leopard managed to escape from the mouth of a terrible crocodile”, says the man.

Stronger and more brazen predators can prey on weaker ones. The man likes to walk in the Kruger Park during the day. Toward evening you can see something interesting.

He is a big lover of wildlife and always takes his camera with him.