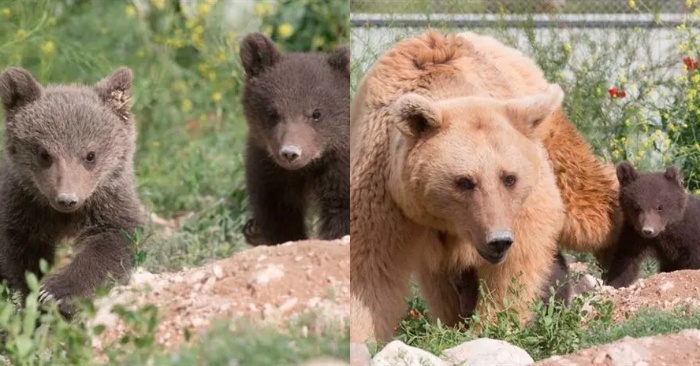 It was surprise for the staff when they saw a bear with two fluffy cubs.

After the release of the pair by the efforts of the Wildlife and Cultural Conservation Fund (WCCF), these bears were sent to a reserve in the mountains.

Dana felt better, she quickly stopped straining and began to eat very actively. The bear has gained a large amount of fat and hibernates, climbing into a large natural den.

No one saw her for several months, but what was the surprise of people when, in the spring, after the emaciated Dana, two fluffy bear cubs came out of the den. Nobody knew that the bear was pregnant. But now it became clear why she ate almost twice as much as Mika.

Look at the adorable faces of these cute twins. Since the staff of the reserve tries not to disturb their wards once again, they cannot yet say what gender the cubs are.

They will be with their mother for at least a year, and then experts will consider releasing them into the wild. True, the parents of the cubs will remain under the care of the reserve until the end of their lives, because the former prisoners will no longer be able to survive outside its walls. Meanwhile, the happy trinity spends a lot of time in the lair, getting out for walks and games in the sun. Dana sometimes goes out into the forest for food, but never gets too far away from the little ones.