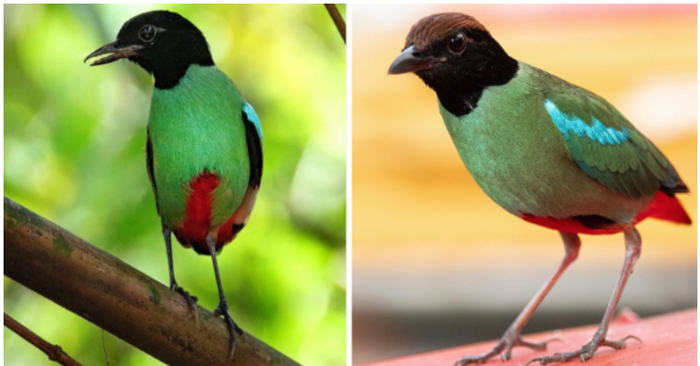 On a timid foraging bird in the forest, splashes of crimson, chestnut, turquoise, and brilliant blue combine to make a beautiful display.

A passerine bird belonging to the Pittidae family is the hooded pitta (Pitta sordida).

This bird’s body is emerald green with light blue dots on its shoulders, and its head is topped with a chestnut feather.

The bird’s rump and belly both end in a vivid red stripe that extends toward its short tail.

Their feet and legs are fairly long. Although they are a little duller than males, females are a bright green as well.

They have less white on their wings but the same slightly downcurved bill as the male.

From southern China and northern India all the way down to Indonesia and Papua-New Guinea, this Asian species can be found.

They are a stealthy bird that hunts adult and larval invertebrates like bugs, beetles, ants, cockroaches, roundworms, snails, and berries among the forest litter.

Between February and August, hooded pittas breed by building a dome-shaped construction on the ground composed of twigs, moss, bamboo stalks, rootlets, and roots. They then cover it with softer material.

The female will lay 3–4 eggs, which both sexes will share incubating for 15–16 days.

After that, until they are 16 days old, both parents feed the chicks. 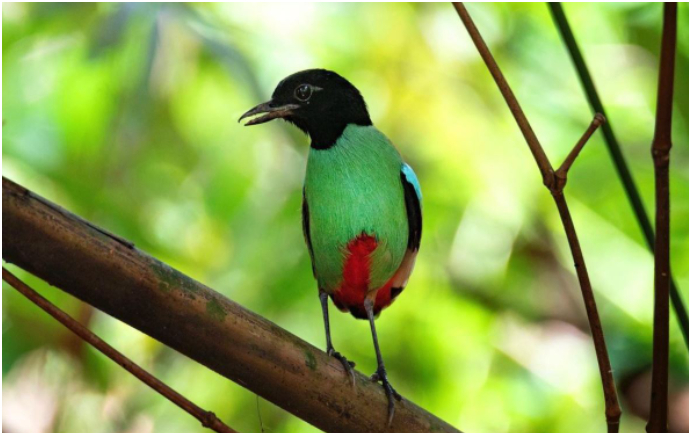 This species is not currently regarded as threatened due of its large breeding territory.

Please be aware that habitat destruction and collecting for the cage bird trade have both contributed to the population’s fast decline.