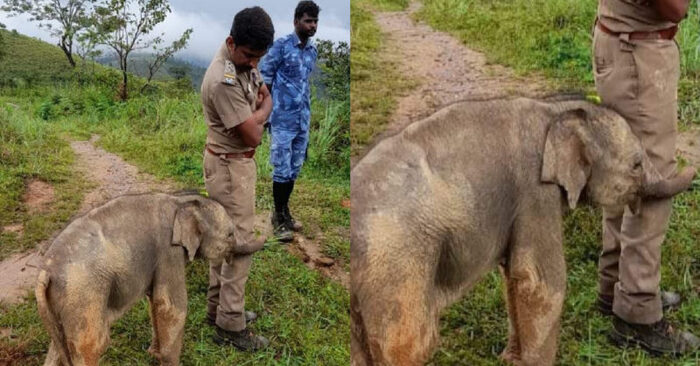 After being reunited with its mother, a baby elephant cuddles a forest officer.

Despite the fact that we call them wild, animals seem to understand love and compassion better than we do.

Even if we don’t speak the same language, gratitude can be expressed without words, as this charming anecdote shows.

It was an exciting moment. Reunited with his mother, the baby elephant hugs the forester.

The baby elephant thanks the boy who saved his life and then reunites him with his mother, gently petting him in an utterly beautiful scene. The sweet event was caught on film and it’s just sweet.

A forestry rescue team in Mangal, Tamil Nadu, India, rescued a missing baby elephant earlier this year, and the tiny baby elephant was eventually reunited with her distraught mother.

The viral moment, first uploaded to Twitter by IFS officer Parveen Kaswan, shows a young elephant wrapping its trunk around the leg of one of the officers to show appreciation for his efforts.

Kaswan described this romantic experience this way: “Love has no words”.

The calf is on its way to reunite with its mother.