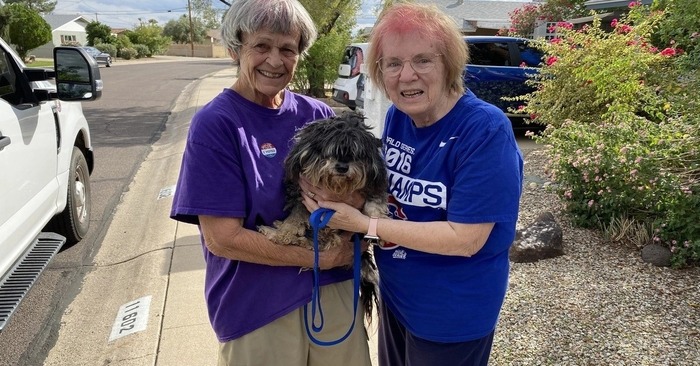 Family finds their dog almost a year after she disappeared.

The owners of Jasper, an elderly dog, have lost all hope of finding him, who went missing 10 months ago. So their surprise was great when they got a call from the shelter about a dog they thought was dead.

The family found their dog almost a year after she disappeared, according to FOX 10 Phoenix.

The animal in question is 13 years old and goes by the name Jasper. He lives in Maricopa County, Arizona (Southwest USA) with his mistresses Judy and Ginny.

On December 28, 2021, he was allowed to play in the garden, like every morning after a walk. When they left, the dog was gone. One gate of the house was open; that’s probably how he got out.

“We went around every street and alley, talking to every person in the area. Ginny made posters”, Judy says. They searched for him for months. They tried to keep hoping to find him, but the more time passed, the more they told themselves that they would have to face the facts. They thought he was dead and even reported him to the Maricopa County Orphanage.

Then, on Sunday, October 23rd, Judy and Ginny received an unexpected phone call from the same front desk. Their interlocutor asked them if they were still looking for Jasper before announcing to them, “We think we’ve found him”. The quadruped was identified thanks to its chip.

Within minutes, the dog’s family was at the shelter for a reunion. Jasper’s hair has grown a lot, hiding his eyes. He immediately recognized his people.

Judy and Ginny have no idea where their dog could have been all this time, but the important thing is that he is back with them.

He was treated to a good bath and a lot of rest before visiting the vet for a full checkup.