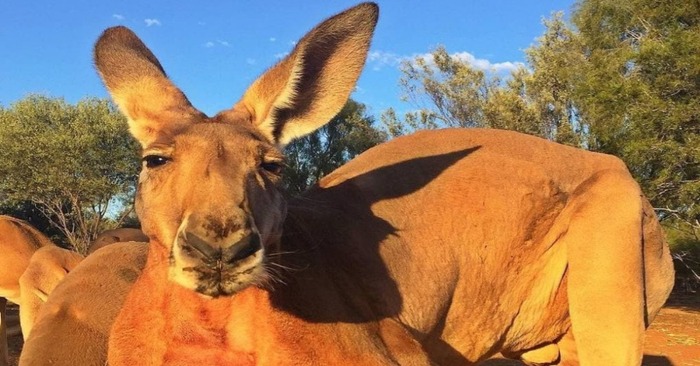 Kangaroo Alice Springs, with confidence can be called the king of kangaroos.

Monty, a strong creature from Australia’s Alice Springs Kangaroo Sanctuary, is definitely the king of kangaroos. And all because of his impressive proportions, because his height has already reached 210 cm, and his weight is rapidly approaching 100 kg, and we cannot even describe what powerful paws he has! At the moment, this guy is only five years old, and he is still considered a teenager in the world of kangaroos. By the way, the legendary father of Monty named Roger at his venerable age weighs about 90 kilograms. Can you imagine how big and powerful little Monty can grow?

5 years is adolescence for a kangaroo.

But now this baby weighs almost 100 kg, and his height reaches 210 cm.

Thanks to his impressive size, he managed to take the place of his father and become the new alpha male.

Monty is so severe that he does not even let the reserve rangers near his family.

Just look at the expression on the face of a real kangaroo king.

By the way, Monty’s parent himself has a pretty strong appearance.

Roger’s height is slightly shorter than Monty’s. That’s only 200 cm, and the weight did not even reach 90 kg.

But just look how playfully he could crush buckets. It’s so impressive!

It is really difficult to predict Monty’s further physical development, but the fact that he is a worthy son of his father is true!