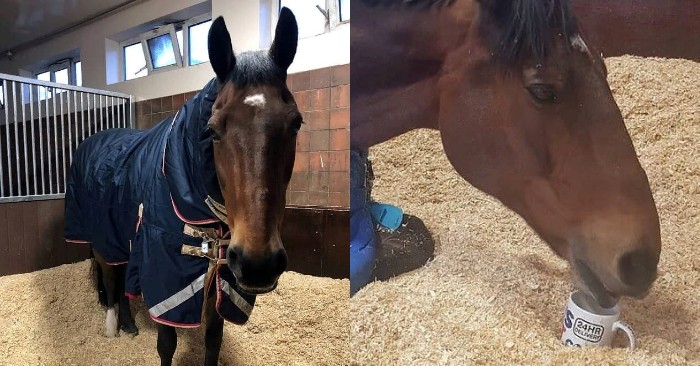 Many find it difficult to start the morning without a cup of coffee or tea.

Before he is ready for daily duties, the police horse demands a cup of tea. Jake “refuses to get out of bed until he is handed a warm cup of tea”, according to Merseyside police. Jake, the tea-drinking horse, certainly pleased the Internet.

Many of us find it hard to start each morning without a cup of coffee or tea to fully wake up. Something similar happened to a police pony in the United Kingdom. A long career and is unlikely to start his shift without a daily mug. A horse needs a morning cup of tea to start the day: According to Metro News, Jake started drinking tea after sneaking a sip from his rider’s cup. When a 20-year-old horse starts sticking his mouth into his rider’s cup every day, the Merseyside Police Mounted Section includes him in their morning cup. According to the Daily Mail, Jake will wait at his stable in Allerton, Liverpool every morning to be handed his special big cup before agreeing to get to work. According to the Merseyside Police, Jake won’t get out of bed until he’s given a warm cup of tea from @tetleyuk, who tweeted a video of Jake enjoying his morning coffee. He’s ready the next day after he eats this. A spokesman for the Merseyside police also said that Jake likes to drink regular tea with skimmed milk and two sugar cubes. A lot of people on social media are raving about Jake’s video. Jake is one of twelve horses we bring into the stable to train with us, according to Lindsey Gaven, director and instructor of the Merseyside Police Mounted Division, who spoke to the Daily Mail. We think Jake is a horse with a strong personality. We’re all used to him ordering tea: while he can get by with one mead, he clearly enjoys it more when you serve him two.