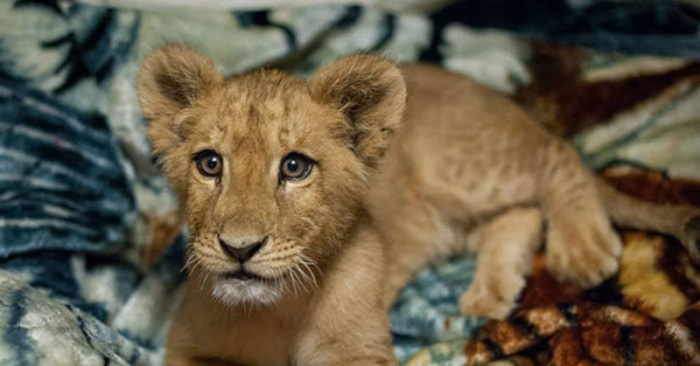 He looks like a spoiled child in his favorite red blanket.

Vicki Kihi is the owner and operator of the Center for Salvation and Education of Wildlife In-Sync Exotics. For many years, she saved countless animals, but perhaps the most special is this lion named Lambert!

Lambert, Lion City, was in the [poor] state in 2014. In-Sync Exotics Salvation Service extended her hand to save this poor lion after he was illegally bought as a domestic animal. He was more like a poor weak puppy than a strong lion, which was supposed to be! Lambert completely recovered and now a beautiful, majestic lion. Nevertheless, an adult lion is now still in the center, because he will not survive in the wild. Now Lambert has 7,000 square feet of running space, including an indoor lair for the shadow and protection, as well as a sunny grass site with a pool where he likes to play.

Lambert is active, playful and brave, but still requires his favorite blanket before bedtime!

Thanks to the efforts of the rescue team, these wild animals in captivity live better, where they take care of them and love! Let’s hope that instead of keeping all wild animals in small cells can be released! So cute as he enjoys comfort in his blanket. He is such a cute lion!