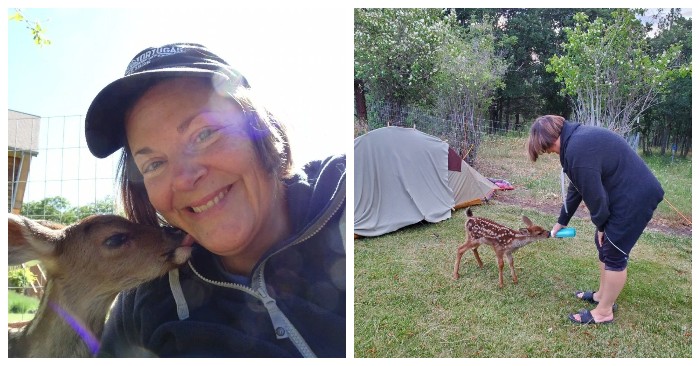 This little deer knew exactly who to turn to for help.

Every spring, the deer population increases because mother deer give birth to fawns. The mating season lasts from late October to early January, and fawns are born from late May to early June. For weeks of her life, the mother deer hides the fawn in the vegetation to protect it from predators. She will return to her baby and feed him regularly. The fawn stays with its mother for about a year after birth, nursing for three to four months. Dawn Rasmussen’s husband was outside in their yard in May 2020 when he heard a fawn crying and bleating like a sheep. When the fawn ran up to him and finally stood on his foot, he went towards the sound. Dawn and her husband named the fawn Thor. They immediately called the vet after finding the fawn, and after a thorough examination, they determined that Thor had been abandoned. They believe that his mother is dead because fawns are not usually left to fend for themselves. “Thor being on his feet was a really bad sign,” Dawn told GeoBeats Animals. Because the vet didn’t have room for him, they instantly became deer parents when Thor was returned to them. “For the first month and a half, I slept outside in a tent next to him, so he was safe at night that way,” she explained. From May to September, she also fed him goat’s milk through a bottle every three hours. Thor was in the wild at four months old, coming and going as he pleased. “He was somewhere there, and when I called: “Thor, dear,” he came running and took his bottle of milk,” she added. Thor is now two and a half years old and has a special bond with Dawn. He is a member of the deer herd that lives nearby and includes Teti and Thor’s sisters. However, he always comes back to hang out with Dawn. When he arrived at her home with a leg injury, their bond grew stronger. Dawn took care of his injury, worked out with him, and even massaged his leg. Thor has made a full recovery and can now run and jump like any other deer. Now he leaves his house for a long time. Dawn has come to appreciate nature and what is happening around her, thanks to the care of Thor, the environment and the importance of animals in our world. “I cherish every moment I spend with Thor”, Dawn said.

Watch the video below to see Thor’s special bond with his caring foster mother!