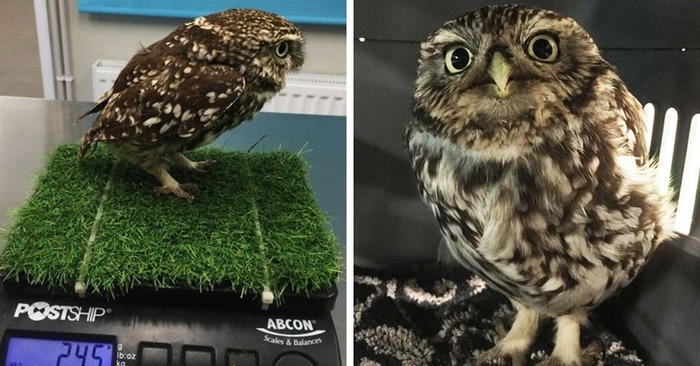 This plump owl was sitting in a ditch and could neither move nor fly.

Wild animals usually avoid people and make contact only when they need help. A similar incident happened recently in the UK. An owl was brought to the Suffolk Owl Sanctuary, which was sitting in a ditch and could neither move nor fly. Experts suggested that the bird was injured or wet in the rain, but there were no visible injuries on it. The cause of all troubles was found only after weighing the cutie. The result showed that the owl was simply overweight. The reserve staff said that the cute bird needs to be put on a diet and after a couple of weeks she was able to go into the wild.

It was thought that the feathered creature had escaped from the owner, but it ate mainly wild food, so the guesses were not confirmed. The owl was examined in the clinic, but nothing serious was found. After weighing the owl, it turned out that excess fat was hidden under the fluffy feathers – the owl weighed 245 grams, which is a third more than normal.

It turned out that she ate too many mice.

Chubby was put on a diet to get into flying shape, and after a few weeks she lost weight and returned to the wild. Later it turned out that not far from the place where the owl was found, there is a field in which many mice were born that year. Apparently, the bird could not stand it and ate more than the norm, and then sat down and waited until it lost weight.

Owl was lucky that she fell into the caring hands of professionals. We hope that now she will keep herself in shape and remain as slim