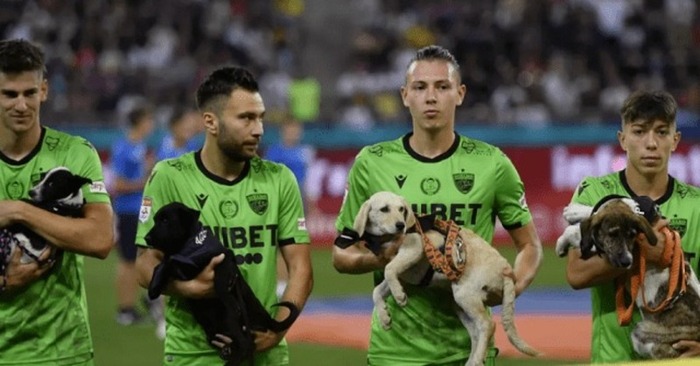 Dynamo players carried dogs onto the field in an effort to help find new homes.

In Romania, matches were held as part of the national football championship. Athletes have long proved that recognition and popularity can serve good and noble purposes.

Many popular football players have long been sponsored by various charitable organizations. They collect an impressive amount and invest their money in helping people in need.

This cup is held under the auspices of helping homeless animals. And although all the participating teams are involved, the participants of the Dynamo capital club have shown really unprecedented activity.

Dinamo Bucharest’s players carried dogs onto the field this weekend in an effort to help find them new homes 🐶 ❤️ pic.twitter.com/knyseNu9og

Before the start of the game, the boys entered the field in full force, but not alone. Each athlete had a dog from a shelter on their laps. The idea was to give little creatures the opportunity to have their own home and loving owners right now.

The fact is that the players are members of one of the most famous and respected clubs in the country and have long been nicknamed “red dogs”, which was a great opportunity to enter the field with “nicknames”. Each dog had a tag on the collar so that future owners could show off their favorite pet. Although football fans probably remembered the athletes who carried dogs around the arena with honor.

Interestingly, the famous club lost to its rival FSB with a score of 0:6. But can Dynamo be called literally a loser after such a wonderful and inspiring activity?