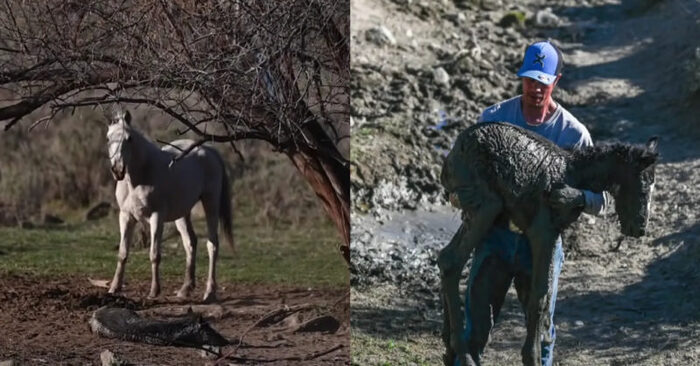 A kind couple gave a second opportunity to a small foal stuck in a muddy hole.

Jordan Camille and his wife Candice were working on their ranch in British Columbia, Canada when they spotted a herd of wild horses behaving strangely.

However, they quickly noticed that one of the foals was in danger and rushed to his aid. The impressive rescue was even caught on film! The Camilles often see wild horses. These magnificent creatures often visit the nearby waterhole. However, because horses hate human contact, they have never been able to get close to them.

However, something unusual happened this time. Jordan was looking at his fences when he noticed that several horses, especially a mare, were behaving strangely. But he quickly realized why! Jordan’s wife, Candice, told CFJC Today, “They usually run away”. “It’s impossible to get near them”. They leave the earth.

But this time, the mare in the video continued to approach us. We rounded the ravine and it was there that we found a colt stuck in a muddy hole at the bottom.