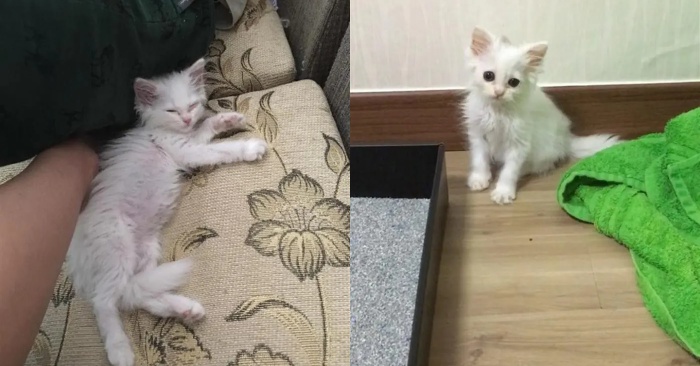 This man realized that the only way to save the kitten was to buy him.

The man came to the pet store for food for his cat, while he was choosing the product he needed, he noticed one of the shop windows. There, behind the glass, lived a small white kitten. But he was in a very bad state.

The pet store employees ignored him. They did not even notice that the baby did not move at all and hardly breathed. In addition, the kitten had already developed an eye infection, and his general condition was simply terrible. The man drew the attention of the store employees to the fact that they literally kill the animal.

Then he realized that the only way to save the kitten is to buy it and get it out of these hellish conditions. And so he did. After the purchase, the man immediately took the baby to the veterinary clinic, where he should spend the first night at large.

The doctors managed to “put the kitten on its feet”, and he began to recover quickly. Now the kitten lives in a new house with a new owner, his health is in order, he is happy and cheerful. The only thing that overshadows his joy is that he cannot find a common language with his master’s old cat.

But he is working on it and does not lose hope of making friends with a neighbor.